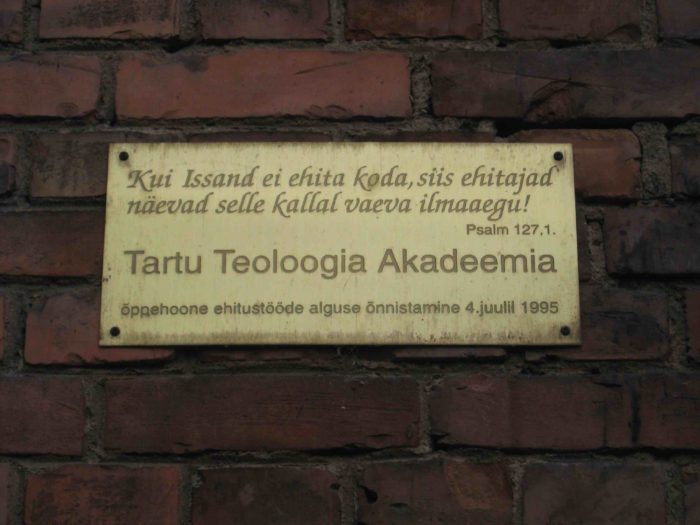 All 27 years we worked in a small rented facility with bad conditions. We tried to get our own home and first attempt started in 1994. We were planning to renovate one old building in the city centrum as we had promises of getting funding for this. 4th of July in 1995 we had consecration ceremony to start renovations of the building. We even hung a plaque on the wall of the house to memorialize that event. On the plaque was a passage from Psalms: Unless the Lord builds the house, the builders labor in vain (Psalm 127:1).

We didn’t build that because we didn’t get the promised funds. We were forced to leave that project behind. During the following years we tried to realize some other building projects but we didn’t succeed.

This plaque remained on the wall of this house that was basically in ruins and stayed there for 17 years. Once in a while we heard that people mocked us because they saw the plaque on the building. They laughed at our trust in God and said: “God ran out of money”. We felt bad and were even thinking of taking this plaque down in darkness. Still we didn’t do that and finally we received conviction that we never were to do that ourselves, because this was God’s promise there. We are just humans and our plans are nothing next to God’s plans. This plaque was waiting there for a time when God’s promise would come to fruition. And somewhere and sometime there is a place where this plaque should be hung.

During that time, we investigated other potential projects, but none of them seemed feasible. Finally in 2012 we gave up making any for our own home and put our dreams for a own facility into God’s hands. About the same time owners started to renovate the building where this plaque was and they asked us whether they could take it down from the wall. We gave permission, because that wasn’t us who wanted to do that. We had conviction that now we just need to wait on God’s provision and we will find a place to hang it. Since that time the plaque was just awaiting a new place where we could hang it because we know God is going to build that house at the right time and in a mysterious way. And when the time is right, He will guide us on that path. And God did it. Praise the Lord!

In the winter of 2018 things just started to come together as puzzle pieces and we were  just forced to act. Now this plaque hangs on the wall of Home of Hope as a confession to all Estonian people that God is keeping his promises, we just HAVE to trust him and BE PATIENT.

The vision of Home of Hope started to take shape in early spring of 2018 and was launched with 100 dollars under God’s guidance in April of the same year. Six weeks later we had raised $125,000 earnest money. Sixteen months later we had raised $557,255 and we took out a $1,3 million loan for 5 years. September 19, 2019 the Christian college of Tartu Academy of Theology became the occupants of the property. December 2, 2019 HOME of HOPE was officially opened. We have experienced tremendous blessing. This facility is a landmark for Estonian people testifying that God is alive.